A week ago, I came across this tweet that made me so intrigued:

It made me remember a couple other times in my career where I was very excited and actually almost obsessed to figure out how something was made. The first time (long ago) that happened was when I saw this "magazine cover tool" where you uploaded a photo and generated a magazine cover. That led me to a whole world of discoveries and my first successful project that allowed me to leave the job I had at the time to live off Google Adsense. Yes, it was a fake magazine cover generator online :) made with PHP and GD.

The other occasion when I felt as motivated to find out how they did something was when I found this tool to keep track of who unfollowed you on Twitter. Again, that led me to a whole world of discoveries, open source contributions, and lots of digging in the Twitter API.

So when I saw that tweet from Tony, I realized this would be basically the cover generator + Twitter API tinkering combined. I got very excited to implement it! Took about a week, couple hours each day, because I had small chunks of code here and there that I could reuse and repurpose.

This is the final result, you can also check it out live: 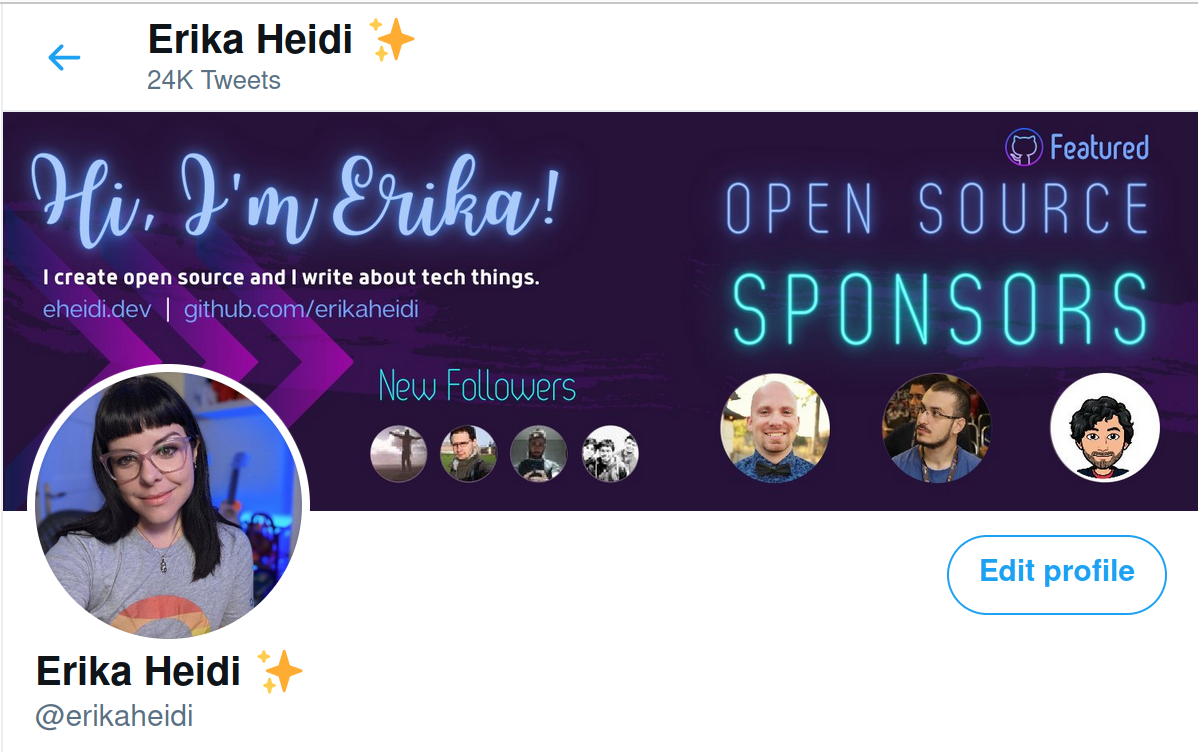 What makes me excited about this little project is that the possibilities are ENDLESS. You can showcase whatever you want that has a dynamic output and can be programmatically obtained (like, via an API). The same approach can be used to tinker with your profile image.

In this tutorial, we'll build a simpler version of that dynamic header that shows your latest 5 Twitter followers. The dynacover GitHub repository contains a few other templates that you may want to experiment with, later.

Before moving along, make sure you have the following available to you:

You are encouraged to use a source code editor such as Visual Studio Code to facilitate working within a PHP project.

If you'd prefer to follow along with the code from an existing repository, or if you just want to try this demo out, you can check erikaheidi/dynacover on GitHub. To match the code in this guide, download version 0.1, since the main branch will change over time.

This will bootstrap de application. Enter the new directory and have a look at the files. Here's a quick overview of the directory structure in a new Minicli app:

The app/Command directory is where all commands are defined. We'll work on that in the next step.

Next, include abraham/twitteroauth as dependency via Composer:

You can also rename your script to match the application name:

To test that everything works as expected, run:

You should see the following output:

These commands are implemented at the app/Command/Help/ directory as example commands that you may want to check out. In the next step, we'll start creating new commands.

Before writing the code that will dynamically generate the image, first make sure you can obtain your latest followers using the TwitterOAuth library and your application / user keys.

We'll create a simple command to list your latest followers.

First, however, we need to set up the Twitter tokens in such a way that you can obtain them from the command controllers. The easiest way to do so is to create a separate file with the credentials and import them into the app's configuration. You should also make sure this file is included within your .gitignore in case you are using version control, so that it is not committed along with the application code.

Create a new file named credentials.php in the root of the application folder. This file should return an array with the application's sensitive data.

Copy the following content to your credentials.php file and replace all the keys with your own Twitter credentials:

To make sure this file isn't included within version control, you should add a line to your .gitignore file. You can do this with the following command, which will append a new line to that file:

Then, edit the dynacover script to merge this data into the main config. This is how you can do it:

Now you should be able to obtain these credentials from any command controller.

With the credentials in place, you can start working with the Twitter API. Create a new directory within app/Command called Fetch.

Create a new file at app/Command/Fetch/FollowersController.php using your preferred code editor. This is a class that needs to extend from the Minicli\Command\CommandController and implement a method named handle, which will handle the command when it's invoked from the prompt.

From the handle method, you'll obtain the needed credentials from the $this->getApp()->config object, accessible as magic properties:

Then, using the TwitterOAuth library, you can create a request to obtain your latest followers.

The following code contains the full implementation, also listing the results as output at the end:

You can now run this command with:

If everything worked as expected, you should see a list with your 10 most recent new followers, like this: 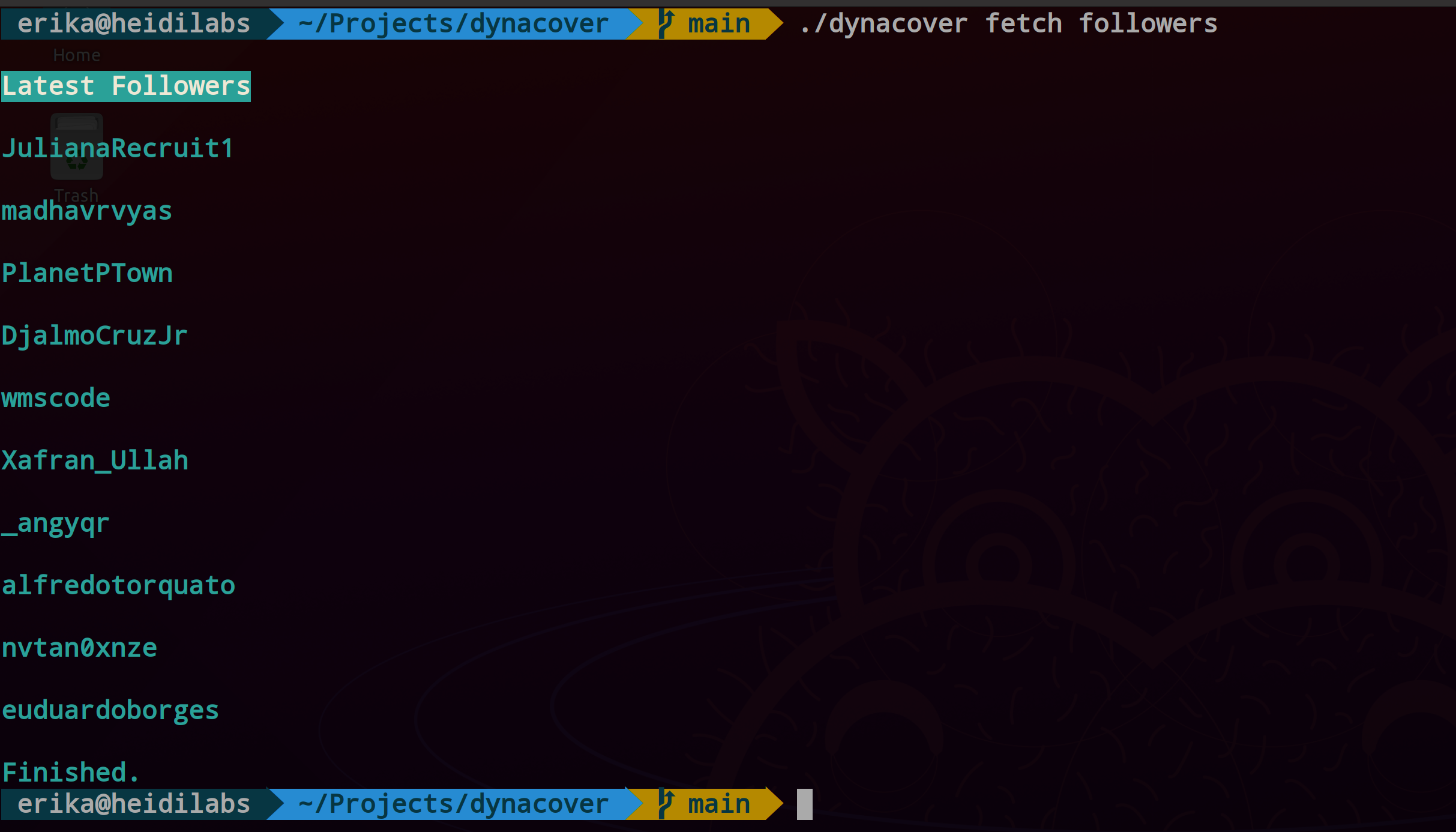 With this data we can start building the dynamic cover image.

3. Generating a Cover with User Avatars

You'll now build a new command to generate the cover image. We'll need the base image that will be pasted on top of the avatar images to give the best effect. I used Canva to create mine, but you can use any image / photo editor able to work with PNGs and transparency.

For this demo, we'll use this example image. After creating this on Canva, I opened the image on Gimp and used the circle selection tool to select where I want the profile images to go, then hit "delete" to delete that portion of the image and make it transparent: 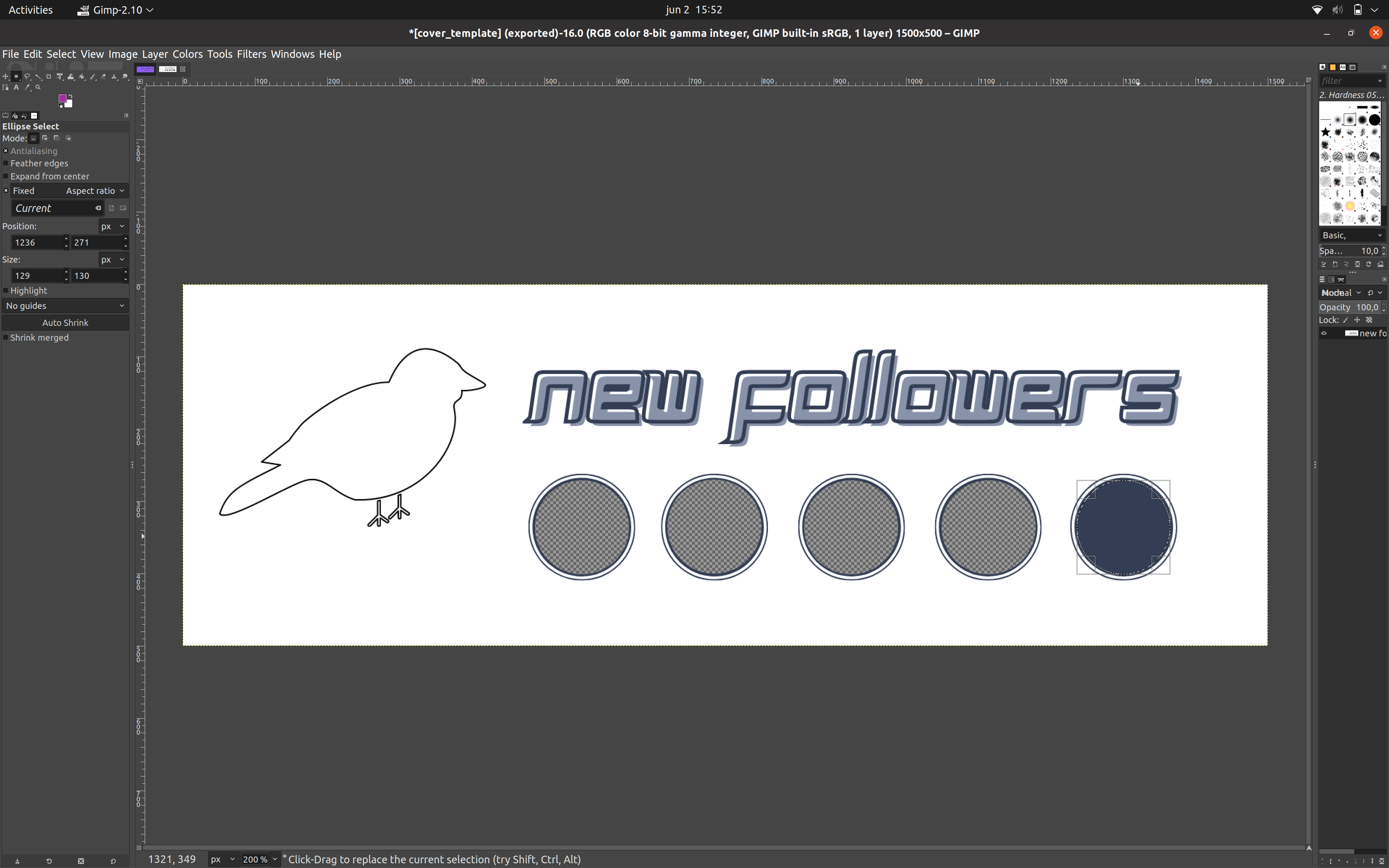 Our coordinates will be based on that image.

Setting Up the Example Cover Image

Create a new folder inside the app directory called Resources to place this cover image.

Create a new command controller in that folder named GenerateController, so it will be reachable as dynacover cover generate later on. You can place the following bootstrap code in it:

Here are the things we'll need to do now:

If you want to try and implement that on your own as a challenge, go ahead! I encourage you to try. If you just want to see it working, then you can copy the following controller code to your own GenerateController.php file.

You can run the command with:

Once it's finished, check the root of the application to see the resulting image. It should look similar to this:

Naturally, you should feel free to customize the image and the position of the placeholders. Just remember to adjust the coordinates accordingly. A few other cover templates are available at the Dynacover GitHub Repository.

Once you are happy with the generated cover, you can go ahead and implement a command to update your twitter cover.

The only thing missing now is the part where we actually update the cover image within our Twitter profile, using the API.

The following controller will:

Once you get this controller set up, you can run:

Then check your Twitter profile to verify that the new cover was uploaded.

5. Include Script on Crontab (Optional)

The last stap to automate your cover generation is to include the update script in Crontab or equivalent, to run at a certain fixed interval (every 5 or 10 minutes, for instance).

I have set mine with Crontab to run every 5 minutes, and this is how I've done it:

This will open a text editor with the crontab for your user. The following line will execute the specified command every 5 minutes (*/5) and throw the output to /dev/null:

Once you save and quit, the new crontab will be installed. Please notice that this should be set on a remote, live server, and using your local machine to run the scheduled script won't be as reliable. Always use full paths for both the php executable and your dynacover script.

In this tutorial, we saw how it is possible to programmatically generate Twitter cover / header images and upload them to your profile, so that you may show your latest followers.

Although the subject of this guide was Twitter followers and the Twitter profile header image, the same principles apply to generate images for other networks and using other APIs. Check the dynacover GitHub for some ideas.

The PHP GD library is very powerful, and this is just scratching the surface of fun things we can build with it!

I hope you have enjoyed this tutorial and please share your profiles once you have implemented it :)